All the same, the standoff between Democrat factions is rather amusing. 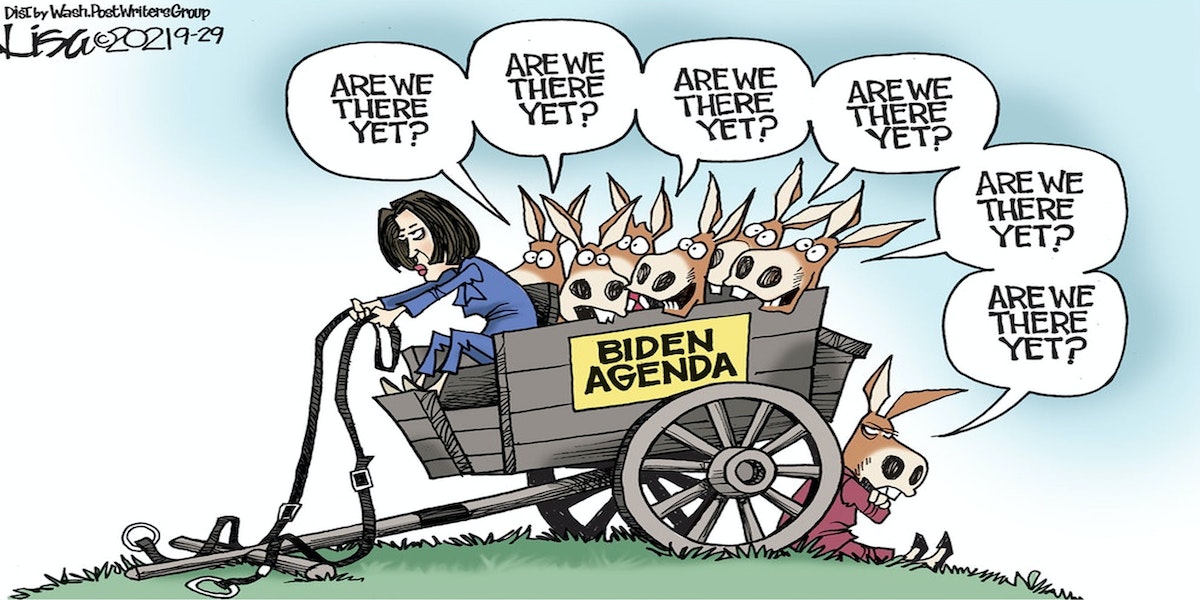 Congressional Democrats are trying to do several things with your money in the next few hours and days — keep the government from shutting down, raise the debt ceiling, pass a $1 trillion "infrastructure" bill, and muscle through a massive socialist grab bag under the reconciliation process. You know, the $5 trillion plan that Democrats had been deceitfully saying costs $3.5 trillion until Joe Biden came up with the novel idea of insisting it actually costs "zero dollars."

Let's start with the shutdown. "With so many critical issues to address," says Senate Majority Leader Chuck Schumer, "the last thing the American people need right now is a government shutdown." Because the government has done such a swell job addressing creating those critical issues.

The truth is that most Americans wouldn't even notice a government shutdown outside of a few hysterical news reports that it had happened. But never fear, fellow citizen: Both chambers of Congress will pass a continuing resolution today that will prevent a shutdown tonight at midnight and fund the government through December 3.

Last night, the House also passed a measure to suspend the debt ceiling until December 17, 2022. The vote was 219-212, with two Democrats and one Republican (Adam Kinzinger of Illinois) defecting their respective sides. Senate Minority Leader Mitch McConnell has so far forced the Senate to reach 60 votes on the debt ceiling, yet no Republican plans to vote to raise it. That's a quandary for Schumer. The U.S. will default on nearly $29 trillion in debt three weeks from now without action.

Meanwhile, House Speaker Nancy Pelosi still hopes to vote on the "infrastructure" plan that's more like 10% infrastructure and 90% leftist wish list. She may hold that vote today, or she may not. The problem for Pelosi isn't Republicans. In fact, several GOP members may vote for it; 19 of them did in the Senate already. Pelosi's problem is with her left wing, which wants to hold "infrastructure" hostage to the bigger socialist bill. And their problem is Senators Joe Manchin and Krysten Sinema, two Democrats who have consistently balked at the price tag of that bigger bill.

"We obviously didn't envision having Republicans as part of our party," groused Minnesota Representative and "Squad" member Ilhan Omar. Balking at full-bore socialism doesn't make one a Republican.

Still, Manchin (D-WV, Trump by 39 points) described the Democrats' spending plan as "fiscal insanity." He noted, "We can't even pay for the essential social programs, like Social Security and Medicare," yet here Democrats are piling on new entitlements and expanding old ones. This irresponsibility, he says, "ignores the everyday reality that America's families continue to pay an unavoidable inflation tax." Manchin concluded, "I cannot — and will not — support trillions in spending or an all or nothing approach that ignores the brutal fiscal reality our nation faces."

Lest you think Manchin is on the verge of switching parties, he too wants to ignore fiscal reality. "I want to do a tax overhaul," he says, because "the 2017 tax cuts are unfair and weighted toward the high end." Actually, nearly all Americans who pay an income tax got a cut in 2017. After raising your taxes, then Manchin will discuss spending your money.

In short, Joe Biden's agenda — and perhaps his presidency — rides on some pretty major disagreements among Democrats. To put it mildly, Biden isn't exactly a competent leader either. Which in this case might be a really good thing for the country.